Liberal, conservative, left, right, socialist, facist, communist, libertarian—you’ve probably heard these words before.  But have you ever been a little bit confused about what they really mean?  If so, you’re not alone—most people are.  Today, most popular “political spectrums” look like this:

Communism on the far left, facism on the far right, and socialism steadily moving closer to the middle.  To tell you the truth, this whole idea is a big social mind game.  Our founders had a better idea of the political spectrum: 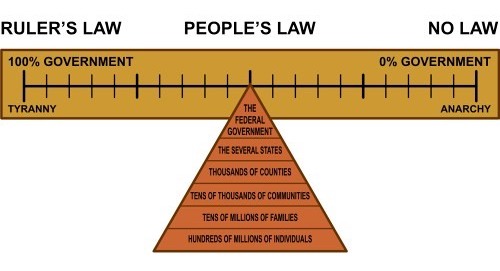 Simple.  100% tyranny on the left, 100% anarchy on the right.  On this spectrum, communism, socialism, and facism would all be in the exact same spot since they’re all just different words for tyranny.  On the other hand, groups like Antifa and BLM would be near 100% anarchy.  The framers of our constitution aimed for the perfect balance in the middle: Enough government to maintain peace and order, but not enough to destroy freedom.  To my knowledge, they did a wonderful job.  But over the years we seem to have taken 2 steps forward (abolition of slavery, for example) and 5 steps backward (massive federal overreach, overspending, and overtaxing).

I imagine the political spectrum of anarchy and tyranny to be a slippery half circle with tyranny on one side and anarchy on the other.  The ideal government is on the top, but it easily slips down to one side or the other.  Throughout history, societies have almost never stayed on top—they almost always bounce from tyranny to anarchy.  However, when the rare balanced government does occur, such as the Roman Republic, it doesn’t last forever.  In fact, the average length of the worlds civilizations is estimated at 200-250 years by most scholars.  The USA is now in its 245th year.

Will we make the same mistakes that previous civilizations have made?  Or will we learn from their mistakes and attempt to save America?  Just remember, not making a choice is a choice.  The USA is slipping towards tyranny at an ever-increasing speed, and if we want to save our nation, we need to act now.  The popular political spectrum is one of the enemy’s greatest tools for division.  It distracts us and gets us into quarrels about where our government should be on the side of tyranny.  Instead we need to zoom out and look at the bigger picture: TYRANNY AND ANARCHY vs LIBERTY.

Happy Thanksgiving! We Are Grateful For…

Pearl Harbor: Why Should You Care?

If only men were angels