Suppose you saw a homeless man on the street. You knew he needed help, but didn’t have anything to give him. However, you had a rich neighbor that you knew could spare a little of his wealth for a poor man in need, so you broke into his house, took some of his money (I mean, how could he miss it?), and gave it to the homeless man. It seems like a crazy thing to do. Obviously, your neighbor is going to call the cops, you’ll get arrested, and you can imagine how ridiculous your protests would sound. (“But officer, I was only trying to help the poor man!”). Regardless of your good intentions, you still committed robbery.

So if it’s robbery when we try to play Robin Hood, then how come it’s ok for the government?

The government spends trillions of dollars per year on welfare: money that they take from the “rich neighbors” (taxpayers), and generously give to the poor homeless people of America.

Today I’m going to go over three reasons why welfare programs are a bad idea for America:

Welfare sounds like a great plan at first. “They’re helping the poor people! What a charitable thing to do!” I hear you say. “What’s the problem? I can spend my money however I want, so I guess the government can too!” There’s just one problem. It’s not the government’s money that they’re spending. It’s yours.

The government can’t spend your money however it wants. There’s a rulebook called the Constitution of the United States of America that tells them what they can and can’t do. This is where people get confused, because the Constitution states, “The congress shall have power to lay and collect taxes [to] promote the general welfare.”

Many people think that this means the government can spend tax dollars on welfare programs. That isn’t true at all.

Other people believe that it means the government can use tax dollars for anything they think will help the people of America. That’s another myth.

He wrote: “The laying of taxes is the power, and the general welfare the purpose for which the power is to be exercised.”

Below is a graph of the 2019 federal budget. We can see that almost half of it is social security, medicare, and medicaid, the three biggest government welfare programs.

In case you’re wondering what the “Nondefense”, and “Other” money is used for, I’ll give you a brief rundown (with welfare programs in red):

If we break down the money allotted to each of these categories, we can simplify the first table… 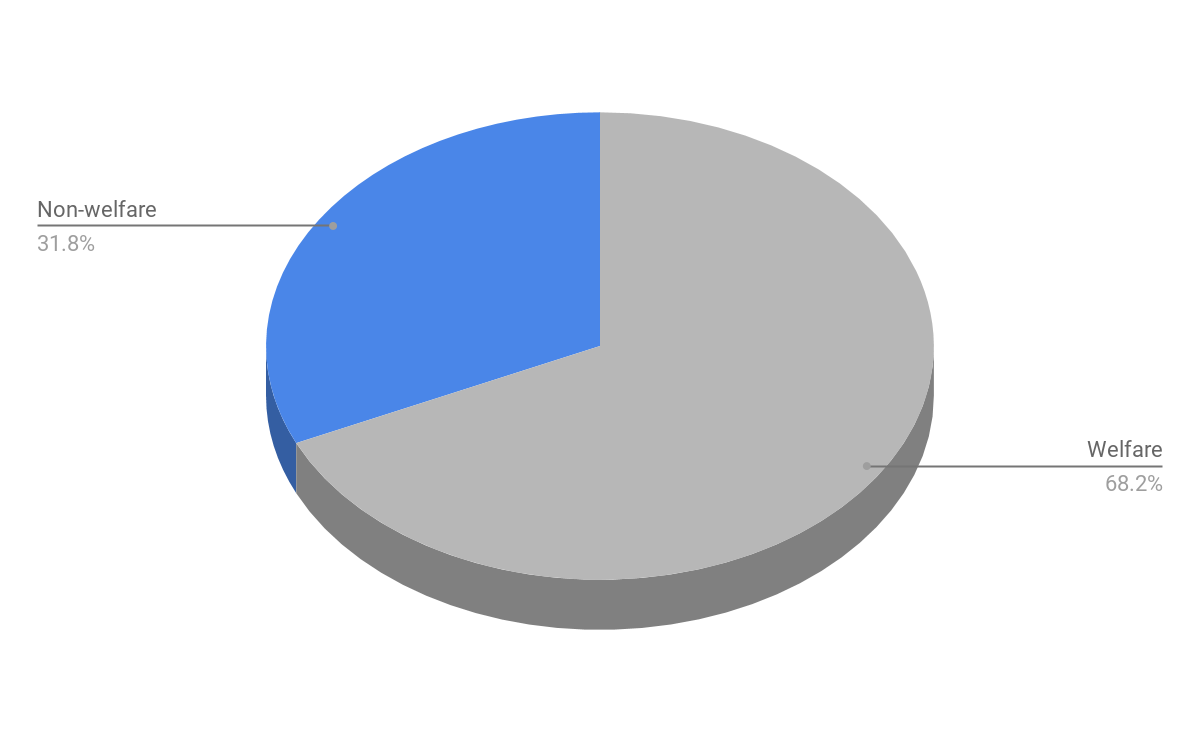 Where Your Tax Dollars Go

Yes! That’s right! 68% of your hard earned federal tax dollars are going to welfare! For the average American, that’s about $5,700 per year! Is that really what you want? Do you like how the government essentially steals 5700 dollars from you every year? I don’t think I have to answer that one.

Currently the government borrows over 1 trillion per year, and most of that goes to fund welfare programs. As I’m writing this article, the national debt is roughly 26.8 trillion dollars, and moving up at the rate of about 3 million dollars every minute!

To put that in perspective, the US national debt is so huge that if Columbus had started borrowing at the rate of 1 hundred dollars per second immediately after he discovered America, the national debt would only be about $1.7 trillion.

If you took the national debt in 1 dollar bills and stacked them on top of each other, the pile would be 1,817,121.2  miles high, or 7.6 times the distance from the earth to the moon.

(For an amazing graphic visual representation of the national debt, visit this link.)

The national debt is huge, and it’s a problem for several reasons.

First, the government pays 375 billion dollars each year in interest on the national debt. That’s over 2,000 dollars in interest per year per American taxpayer! The national debt is directly costing us money without us doing anything!

Second, the higher a country’s national debt is compared to the nations GDP the more it affects the economy. A study by the World Bank found that if the debt-to-GDP ratio of a country exceeds 77% for an extended period of time, it slows economic growth. Right now, the US debt-to-GDP ratio is sitting at about 103%, which means that the debt is greater than the GDP, so it’s definitely stopping up our economy!

Third, the national debt is a burden that gets passed down from generation to generation, getting heavier each time it is passed on. Eventually the countries we have borrowed from will demand payment, and America’s economy will collapse.

It’s true that there are poor people out there that need our help. It is true that as good citizens, we should set aside some of our wealth for those less fortunate. But it’s not the government’s job to tell us what to do with our money, and we still have the freedom to choose.

Are welfare programs a good idea for America? If you said yes, think again. It’s obvious that they are leading us down a path that we really don’t want to be on. When the government ignores the constitution and sets up welfare programs, it makes them feel like they can ignore other parts of the constitution, like the bill of rights. When the government is taking thousands of dollars from each individual to fund these institutions, it violates the right of the people to their private property. When the government borrows trillions of dollars from other countries to fund these programs, and then expects the people to pay interest, as well as bearing the economic burden of debt, it’s just too much.

As free Americans, we need to stand up for our liberty, and do our best to make changes. We need to get rid of government welfare programs, which will allow us to pay off the national debt, and then lower taxes drastically, leading to economic prosperity.

Our country will thrive under freedom.

TAKING THE AX TO THE ROOT